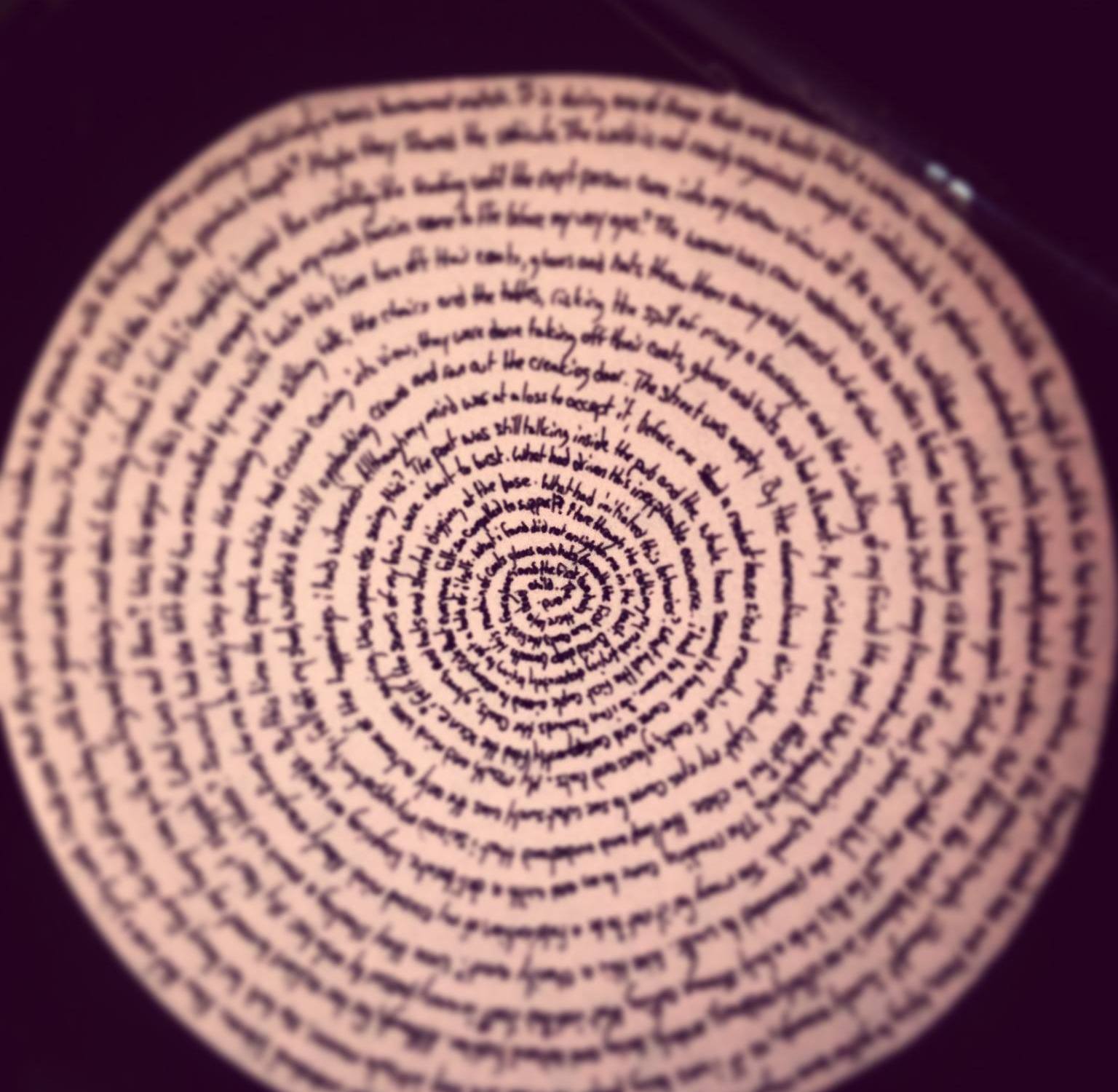 The basement pub, with its low ceiling and hanging lights, made everyone seem deformatively tall. Bodies here assumed disproportionate demeanour. As though caught once more by adolescent spurs of growth, no one knew what posture to assume; or, worse yet, how to manage their gangly arms that now hung low at their sides. The air was stuffed with everyone’s body odour and perfumes, warm with their breath, humid with their perspiration, stuffy with dust and airborne spores… Everyone wore grave expressions on their faces. Whether this was simply the usual suspects allured by shady poetry readings, or whether it was a trick of the sparse lighting in the room, I never could decide. One thing was for certain, there was a percolation of sweat to be seen on skin to an extent that one could distinctly hear it trickle onto the floor. There it pooled, hydrating the sticky filth that clung noisily to the soles of our shoes. I pulled my collar, checked from a tag for, as though worn the wrong way round, I felt it desired my strangulation.

From my stool at the bar, I was granted a view of a small basement window near the ceiling. Outside it was night. The dim yellow street lights shone just bright enough to reveal a thin curtain of smoke that rose and danced inside the room. My eyes caught sight of this opening to the outside world and clung to it against the claustrophobia wrought by the oppressive atmospheric pressure here below. It was to me fresh air and sanity. When a motion in the room would hide it from sight, my collar made its choking presence known again and my mouth would become terribly dry; my eyes would water and I would feel lost for a moment. Internally, being here was a struggle.

The reading was set to begin and the screechy feedback from the microphone tests made everyone promptly settle like dust upon the uncomfortable chairs. Thus my little island of light across the room was granted me anew. Thank goodness for our ingrained school-children ways. To my relief, the poet, a good friend of mine, grabbed the microphone and settled to one side of the podium, and so I was accorded a permanent view on my window-shaped peace of mind. It so happened that the bar was in slight recess of the worn speaker system, and I was only to hear muffled throat sounds from the entire reading. Whether or not this actually enhanced the meagre performance, was always debatable events of this type. The prospect of changing places did not even enter my mind as I could not bear the thought of losing sight of my faithful window of hope. Of course, I would congratulate my friend all the same. I would allude to his oratory skills, and would surely buy his book and probably read it to make up for what I had missed during the evening. As these shameless  escape-through-the-back-door thoughts were being mulled over in by mind so as to craft a potential appropriate behaviour, I came to witness something that just barely caught my attention outside in the streets. A couple approached something that was, for me, beyond sight. They proceeded to take off their coats, gloves and hats and threw them at this out of view recipient. Subconsciously, I swiftly resolved the mystery and imagined it to be a car. They had opened the trunk, had thrown their belongings inside it and left. At the time, the act only struck me as peculiar for the simple fact that it was now late fall and night. The weather called to dress up, not to dress down.

The reading went on. I caught words here and there, trying to gather some vague meaning. If only to help my future empty compliments. Women. Now that’s a juicy word! I could use that later. My eyes drifted from the window to the reader with the frequency of one attentively following a tennis match. It is during one of these back and forths that a woman came into view outside. How odd it would be for her to repeat the actions of the previous couple, I thought, naively. Then, surely enough, she took her heavy faux-fur coat off and, along with her gloves and hat, threw everything out of sight. It was as though I was being played for a fool in the most improbably intricate manner. Did she know the previous couple? Maybe they shared the vehicle. Yes, that’s what it was. The world was not nearly organised enough for individuals to perform coordinated non-sense actions independently and at a whim. Out there, the world behaved in an utterly ordinary, orderly, boring and rational fashion.

Although, for her actions to meet my exact fancy was quite exciting and pleasing, I must admit. Exciting indeed. In fact, from then on, I completely ignored the anyway unintelligible reading until the next person came into view through the narrow window some minutes later. A woman again. Instantly, I projected onto her my will for there to be a truly strange calling that instilled itself in every passer-by.

My heart stopped. What was out there? Was the oxygen in this place rare enough to make my mind’s fancies come to life before my very eyes? The woman was now undressed, as the others before her, and, having rid herself of coat, gloves and hat, she proceeded to walk away.

Was this a charity event? Were they shooting a movie out there? Scarcely had the woman left that two men walked by, and, with notable haste this time, they tore off their coats, gloves and hats, threw them away and paced out of view. This repeated itself many, many times and with increasing speed. Too many times. Too many times for it not to be a fabrication of my crazed mind. Nearly enough times for me to rudely step between the standing and sitting attendees, the chairs and the tables, risking the spill of many beverages and the insulting of my friend the poet. What temptation it was! The reading came to an end with a deliberate lingering on words. By this time the people outside had ceased rushing in and out of view. They had ceased taking off their coats, gloves and hat, and had all gone. My mind was in such a thirst to close the the loop, that I seized the first appropriate opportunity, fell off my stool, wrestled the still applauding crowd and ran out the creaking door.

The street was empty. I cursed my politeness for I had arrived too late to the scene. By the dim yellow light, my eyes made out what, surely, was the only possible outcome of the bizarre happenings. Although my mind was at a loss to accept it, before me stood a sizeable mountain of coats, gloves and hats.

Wha..?, I half-worded. Was anyone else seeing this? While the poet had read, the whole town seemed to have come and subsequently fled the scene, divested of coat, gloves and hats. I felt the seams of my mind about to burst. What had driven this inexplicable occurrence? I had to know. So I ran towards the coats, gloves and hats and started digging at the base of the heap towards that which had initiated this behaviour. What had the first couple aimed to accomplish that everyone else felt so compelled to imitate? I tore through the clothing, my mind helplessly trying to get a hold of itself.

What I found failed to enlighten me in the least. Buried deep beneath the mountain of discarded coats, gloves and hats; beneath the first two coats, the first four gloves and the first two hats; there lay dead homeless child. Awe-struck, out of breath, I stood there helplessly gazing at the frozen child. Then, inexplicably, I took my coat off and wrapped it around the child, cast my hat and gloves onto the pile and walked away into the merciless streets.

Love in the Time of Corona – A Squamish Hibernation

Rain. How quickly things become normal. How quickly damp and cold becomes simply the way a body feels. Winter in Squamish creeps into the soul with such subtle artistry. And sure, at first we keep the inner-fire alive, stoking the low flames with memories of sun, the smell of cooking earth, of winters spent in […] 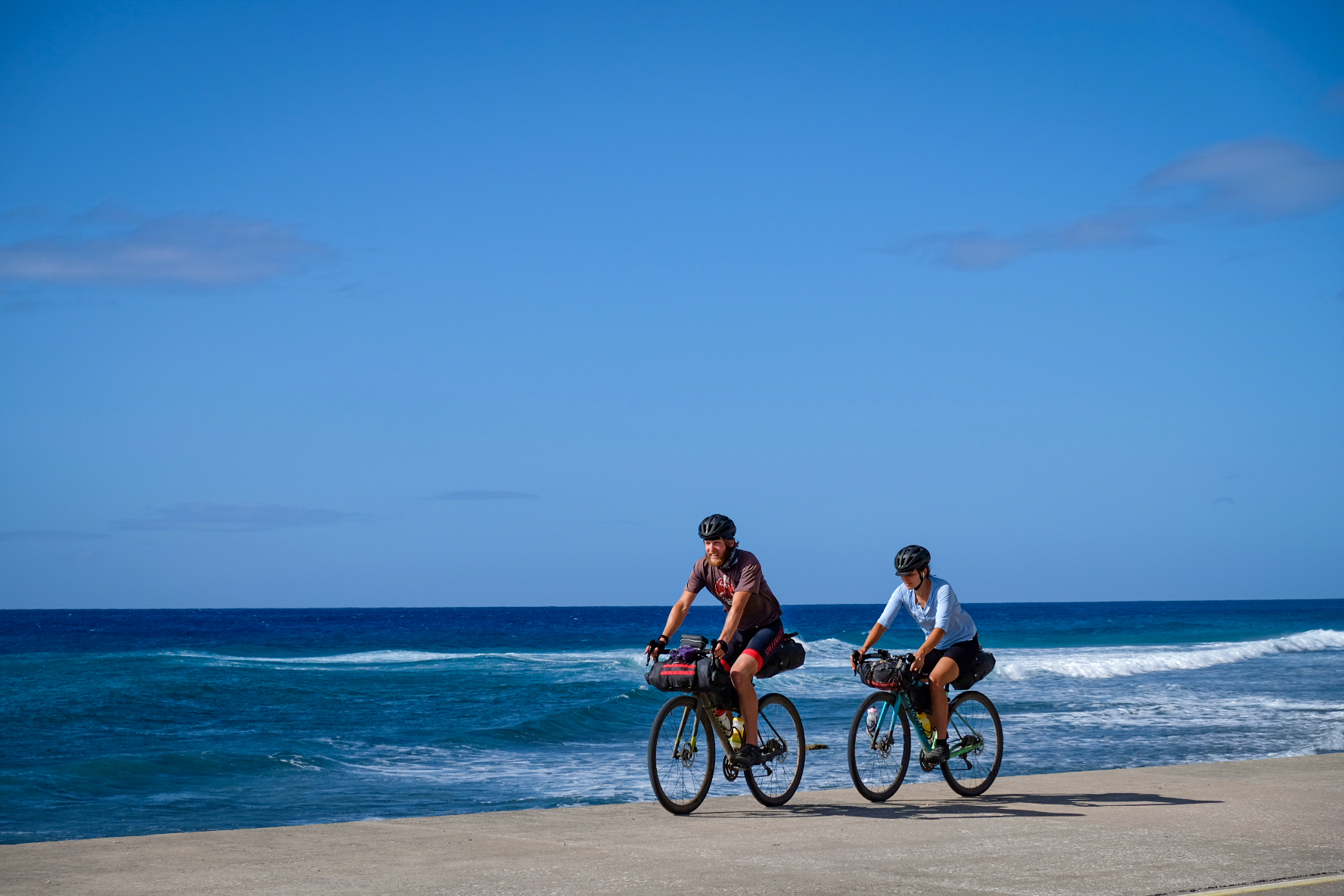 Cinco pizzas por favor. I’m not sharing. Ceci can get her own. When I was a kid, or so my grandfather always reminds us, my brother & I would chuck full garbage bags against the garage door of his cottage and say that our utmost ambition in life was to become garbage men. And to […]

A Day in the Life of a Brusher

No one is a human being at 3am. Not party till dawn 3am. Tossing and turning, have to get up for work 3am. In the grips of withdrawal from a modicum of sleep you don’t even remember consuming, you drag on your threadbare button-up shirt. Wafts of laundry detergent and gasoline, drift in your stumbling […]

Take a swig of this, te va a rehidratar! The day is over, we’re in a rusty carcass on wheels sucking diesel. Through the dusty windshield ahead another miracle of engineering running on black smoke and buena suerte is transporting the bikes. I’m looking through the Gatorade bottle that’s being handed down to me, at […]

Blink once, Ceci is riding her mountain bike on the highest suspension bridge in the world on her way to her first Enduro World Series finish. Blink twice, Camille is running on a ridge at 2,450m in the snow on her way to finishing her first 60k UltraMarathon in 4th place. Blink one last time, […]